To share your memory on the wall of William Wiles, sign in using one of the following options:

Provide comfort for the family of William Wiles with a meaningful gesture of sympathy.

Posted Jul 12, 2019 at 01:12am
Babe, you are the love of my life, you were my provider, my soulmate, my best friend and in my heart, my husband. You spoiled me, loved me and made me very happy. We were very happy together and had 9 beautiful, but short years together. I’m grateful you are in heaven with Joey, your dad and many other loved ones. Have you see Booger yet? Please tell her how much we’ve missed her and give her a huge hug from me. Timmy and our babies miss you as much as I do. Our home and especially your chair (lol) are very empty without you. You gave me a life and love one could only hope for. I’m so thankful for Mackenzie, Tabi, Michael, Mitchell and Josh. Without them I couldn’t get through this. And you’re right, Josh has my back and has been a huge crutch for me. He has your loving heart. I will see you in heaven my love. ❤️❤️🥰
Comment Share
Share via: 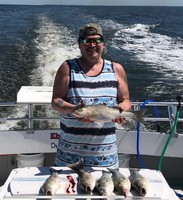