To share your memory on the wall of John Hegburg, sign in using one of the following options:

Provide comfort for the family of John Hegburg with a meaningful gesture of sympathy.

On July 8, 1961 he married the love of his life, Janet (Davis) Hegburg in Fairview, PA. Together they enjoyed over 58 years of marriage.

John attended the Brookville Presbyterian Church and was a proud member of the Lions Club.

John was a man that loved the outdoors. He was an avid hunter, enjoyed fishing, camping and golfing. In retirement, John adopted Brookville as his own by spending his time volunteering using his lifelong construction and consulting expertise. A few projects John took pride in were revamping the Jefferson County House, Brookville YMCA, the Rebecca M. Arthurs Library, CREATE, the Chateau d’Argy and the reconstruction of Farmers Inn. His generous and loving personality showed through his dedication to his family and friends. He looked forward to the family hunting and fishing trips and going to the “river” camp at the Clarion River on the weekends.

In memory of John, memorial donations can be made to American Tinnitus Association or the Brookville YMCA.

Family and friends will be received on Sunday, July 21, 2019 from 2-7 pm, at the McKinney-d’Argy Funeral Home, Ltd; 345 Main Street, Brookville, PA 15825. A funeral service will be held on Monday, July 22, 2019 also at the funeral home beginning at 11:00 am with Pastor Boyd Edmondson officiating. Interment will take place at Mt. Tabor Cemetery, Sigel, Jefferson County, PA. Online condolences and other information may be found by visiting www.mckinneydargy.com.
Read Less

We encourage you to share your most beloved memories of John here, so that the family and other loved ones can always see it. You can upload cherished photographs, or share your favorite stories, and can even comment on those shared by others.

Posted Jul 21, 2019 at 02:36pm
Rest in peace John Pressley Hegburg.
"To laugh often and much; To win the respect of intelligent people and the affection of children; To earn the appreciation of honest critics and endure the betrayal of false friends; To appreciate beauty, to find the best in others; To leave the world a bit better, whether by a healthy child, a garden patch or a redeemed social condition; To know even one life has breathed easier because you have lived. This is to have succeeded." ... Ralph Waldo Emerson

Posted Jul 20, 2019 at 09:57am
Don and Maria, thinking and praying for all of you at this difficult time. We are in PA if you need anything. Love ya
Comment Share
Share via: 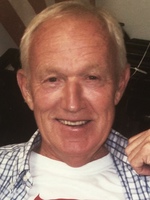