To share your memory on the wall of Peter Fernandez, sign in using one of the following options:

To plant a memorial tree in honor of Peter Fernandez, please visit our Heartfelt Sympathies Store.

We encourage you to share your most beloved memories of Peter here, so that the family and other loved ones can always see it. You can upload cherished photographs, or share your favorite stories, and can even comment on those shared by others.

We are very sorry to hear of Pete's passing. He is now very busy finding his very extended family in Heaven and filling all of them in with the latest. I will always remember the last two visits I had with Pete, Pat, Uncle Al and I with none of us able to get a word in edgewise. It was really fun to see Pete bring up a story that Uncle Al was in and Al just broke out laughing. Of coarse these stories were decades ago and only Pat could confirm and she just shook her head. Having lunch in town with Pat was fun esp when she said it was good we left and let the BOYS talk alone for a while. I will cherish those visit's. God Bless Pete.Love, Michael and Yvonne Cleaver 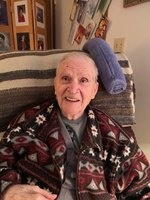