To share your memory on the wall of Ira Minor, sign in using one of the following options:

To plant a memorial tree in honor of Ira Minor, please visit our Heartfelt Sympathies Store.

There are no events scheduled. You can still show your support by sending flowers directly to the family, or planting a memorial tree in memory of Ira Minor.
Plant a Tree

We encourage you to share your most beloved memories of Ira here, so that the family and other loved ones can always see it. You can upload cherished photographs, or share your favorite stories, and can even comment on those shared by others.

Posted Mar 27, 2020 at 09:30pm
Diana Farley
I am very thankful I was able to know Ira through Grace Lutheran Church and as our neighbor. He wore a smile that could always lift you up. His wife, Tommie was an angel who made it her life's mission to help others. Because he lived, a block away from our house, my husband Jim and I always offered him help if he needed it. When Jim was mowing, he often drove to his yard and made a few sweeps. He was a very humble man and graciously accepted Jim's efforts, although he proclaimed he could do it himself. When I found out Ira had been released from the hospital, I called and asked him to promise to call me if he needed anything. I was shocked and honored when he called me at 10:10 the night he passed, asking if I would come and take him to the hospital. I believe God put us together that night so he would not pass away on his own. His home is stacked with book after book that offers a wealth of information into his amazing life. May he rest in Peace.

Posted Mar 25, 2020 at 07:34pm
I personally would like to share my condolences to Ira's family. I don't have to tell you what a wonderful man he was. I only would like to confirm with you what you already know to be true of Ira and his character.

My only contact with Ira was through the (Brookville) YMCA. We had similar exercise routines throughout the week and often would find ourselves contending for a favored rowing machine around the same time. He was always gracious and allow me get on the "good" one. He and his other "rowing partner," Howard, would often spend the morning rowing and talking intermittently- I typically would join in after my workout when I pulled my earbuds out of my head. I so enjoyed visiting with him, whether we talked politics, history, cars or even philosophy. Being a veteran myself, I especially loved hearing from his experiences as a clerk during WWII.

I know his health had not been well, but I was blown away that he still had the fight to wake up and get on that rowing machine at 6AM. I'm not sure how he did it. Talk about motivation/ determination and just refused to give up. And if that's not enough, often he would then go on to volunteer at the hospital, church or both. He certainly had a desire to "live" life and make each day count.

But what most impressed me about Ira, was infectious positive attitude. He always carried a smile on his face despite his health (which he never complained about) or how things were going on in the world. I can still hear him say, "Oh well, what ya' gonna do?"

To Ira's family, I want to let you know that though my contact with him was pretty brief, I want to let you know what a positive impact he had on my life. I will miss seeing him at the Y. But it truly was an honor to have met him and I feel that I am a richer man for getting to know him. My sincerest condolences to each of you.
Comment Share
Share via:

Posted Mar 24, 2020 at 11:29am
I didn't know Ira well but crossed paths with him a few times at local events. He always had a smile and loved to chat!
Comment Share
Share via:

Posted Mar 24, 2020 at 10:52am
I was fortunate to be friends with Ira for the past eight years, and spoke with him about every time I crossed his path. He was born in 1928, and he told me many stories about growing up in a racially-divided America that treated him as a second-class citizen because of his color. He was too young to fight in World War 2, but joined the service as soon as he was old enough to serve his country. He soon realized the military mostly saw him as suited for menial tasks, and kept “coloreds” in special divisions. It bothered him, but he never let these barriers stop him, and he entered the Korean War in 1950 and remained in the service for 22 years.

He initially served as a company clerk, but because of his desire to always further this education in any way he could, he was shipped overseas and went to school in Germany to continue learning his job. After leaving Germany, he went to Army Language school and learned Russian, in hopes of working as a translator. When the US officially entered the Viet Nam war, and continued his work as a clerk and personnel officer.

He left the military in the early 1970s and settled back in the states with his family. I only became friends with him a short time ago, but was always impressed with his sense of decency, as well as the love and respect he showed for all his fellow people, regardless of any perceived differences. He told me once that he tried to treat all people the way he wished to be treated, and he treated everyone as worthwhile and worthy of respect.

Ira was a shining light, one of those human beings who makes your life better for knowing him. Virtually everyone I know who took the time to get to know him realized this. Those who didn’t are poorer for not making the effort.

He came to my place of work on many occasions, and I always noticed how people began to gravitate toward him. I believe most recognized that this was an exemplary person they were talking to, someone who had lots to say, and whose knowledge they would benefit from. Spread his light. It deserves to be shared.
Comment Share
Share via:

Thank you for posting this, Kelly! I knew that Ira was a veteran but was unaware of his extensive service to our nation. 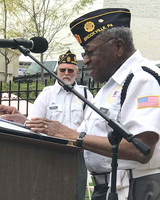 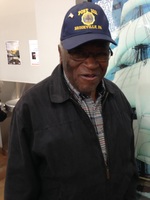