To share your memory on the wall of Marilyn "Sis" Corbett, sign in using one of the following options:

Provide comfort for the family of Marilyn "Sis" Corbett with a meaningful gesture of sympathy.

We encourage you to share your most beloved memories of Marilyn "Sis" here, so that the family and other loved ones can always see it. You can upload cherished photographs, or share your favorite stories, and can even comment on those shared by others.

Posted Mar 30, 2020 at 10:16am
My dear friend...so go and run free with the angels. Dance around the golden clouds. Our Lord has chosen you to be with him and I feel so very proud. Although...he has taken you from us and our pain a lifetime will last. Your memories will never escape me but make me glad for the time we had. Your face will always be hidden...deep within my heart. Each precious moment you gave me will never ever depart. So go and run free with the angels as they sing so tenderly. But mom, please be sure to tell them to take good care of you for me. so as always, no goodbyes, just see you soon.
Comment Share
Share via:
LP

Posted Mar 29, 2020 at 12:54pm
Dear Family & Friends of Sis,
My heart is breaking for you and with you.
As I visited Jefferson Manor almost every day
for the past year I looked forward to visiting with this
vivacious lady. Sis sparkled with joy when speaking of her beloved
family. Sis entertained with stories of her incredible
experiences, achievements & spirited descriptions of daily life.
Sis will be deeply missed. Please accept our heartfelt
sympathy. With prayers, Cheryl (& Alyce) Spitzer. 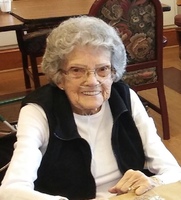