To share your memory on the wall of Mary Cook, sign in using one of the following options:

Provide comfort for the family of Mary Cook with a meaningful gesture of sympathy.

To plant a memorial tree in honor of Mary Cook, please visit our Heartfelt Sympathies Store.

We encourage you to share your most beloved memories of Mary here, so that the family and other loved ones can always see it. You can upload cherished photographs, or share your favorite stories, and can even comment on those shared by others.

Posted Apr 04, 2020 at 10:39am
When we think of Mary we think of her as the most precious angel on earth. Mary always had kind words, made us smile or laugh and was full of so much love. Her faith kept her strong and in return kept us stronger. If there was one last thing we could tell Mary and the rest of the family, its that we feel blessed to be part of the family and share her faith and love. Our heartfelt condolences to Don, Ron, Gindy, Molly and their families. We will miss Mary deeply, but we know that she greeted Herbie with that notorious big smile and she is reunited with God and all her loved ones. With love, Todd, Jenn, Hannah, Dylan and Marge

Posted Apr 04, 2020 at 10:30am
Condolences to the cook family. Thinking of Mary Herb and the Family. Mary was always loving, caring and inviting into her home. God bless. Bryant

Posted Apr 04, 2020 at 06:33am
Mary was one of the most lovable, caring and accepting people I have ever been blessed to know. I am thankful our paths crossed last year after many years of not seeing each other. Mary will always hold a special place in my heart. Truly one of the best people I have ever known. Love and prayers to Ron, Don, Gindy, Molly and families. The world is a little less bright without her here.
Comment Share
Share via:

Posted Apr 03, 2020 at 02:10pm
Don, Gindy, Ron, Molly: I'm so sorry to hear about Mary. I visited whenever I could and we would sit and talk about anything and everything. I will miss those talks, her advice, her laughs, and her hugs. When I moved to my Aunts, I was young, scared, & confused, your mom was one of my angels in disguise. I thank God for your mom and any other person that took their time to help me. Will keep all of you and your families in my thoughts and prayers. God bless.
Comment Share
Share via: 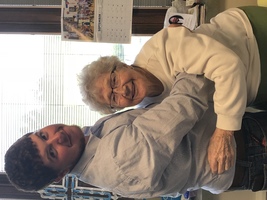