To share your memory on the wall of Harry "Blake" Hetrick, sign in using one of the following options:

Provide comfort for the family of Harry "Blake" Hetrick with a meaningful gesture of sympathy.

The live broadcast may be viewed by entering http://webcast.funeralvue.com/events/viewer/27595 into your web browser.
Read Less

We encourage you to share your most beloved memories of Harry "Blake" here, so that the family and other loved ones can always see it. You can upload cherished photographs, or share your favorite stories, and can even comment on those shared by others.

Posted Apr 22, 2020 at 09:06am
So sorry about your loss. Our thoughts and prayers are with you. I always remember the good times when all our families went camping at Clear Creek
Comment Share
Share via:
LP

Posted Apr 17, 2020 at 11:42am
linda preston
sorry to hear about dad ..he was wonderful person I always like talking to him...thoughts and prayers are with family at this time of need...god bless
Comment Share
Share via:
SB

Posted Apr 16, 2020 at 05:43pm
Sorry to hear about your Dad. I always enjoyed running into your Dad always a smile and he would call me Susie Snowflake. Prayers for you and your family. Bill and Sue(Straitiff) Brownlee
Comment Share
Share via:
MW

Posted Apr 16, 2020 at 01:33pm
Cindy, Gary, & Family--I have fond memories of your dad and his sense of humor. Every time we saw each other (usually in the hospital), he would ask "where is your lamb?" We are sorry for your loss--I know that you will miss him. Dan & Mary Wise
Comment Share
Share via:
MB 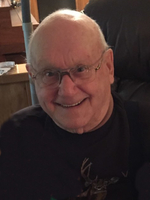