To share your memory on the wall of Harold "Pete" Dinger, sign in using one of the following options:

Provide comfort for the family of Harold "Pete" Dinger with a meaningful gesture of sympathy.

The live broadcast may be viewed by entering http://webcast.funeralvue.com/events/viewer/29044 into your web browser.
Read Less

We encourage you to share your most beloved memories of Harold "Pete" here, so that the family and other loved ones can always see it. You can upload cherished photographs, or share your favorite stories, and can even comment on those shared by others.

Posted May 13, 2020 at 08:46pm
Worked with Pete at Haughs Dairy for years always fun to be around. RIP my friend Pete
Comment Share
Share via:
AK

Posted May 09, 2020 at 10:27am
Pete was a kind and caring man, and helped me greatly with so many things. He will be very dearly missed.
Comment Share
Share via:

Posted May 09, 2020 at 10:16am
My wife and I will always remember Pete’s smile and kind words. He was a great husband and father. Thank you for the pictures.
Comment Share
Share via: 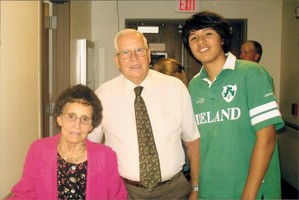